8K UHD: What You Need to Know From American Sound 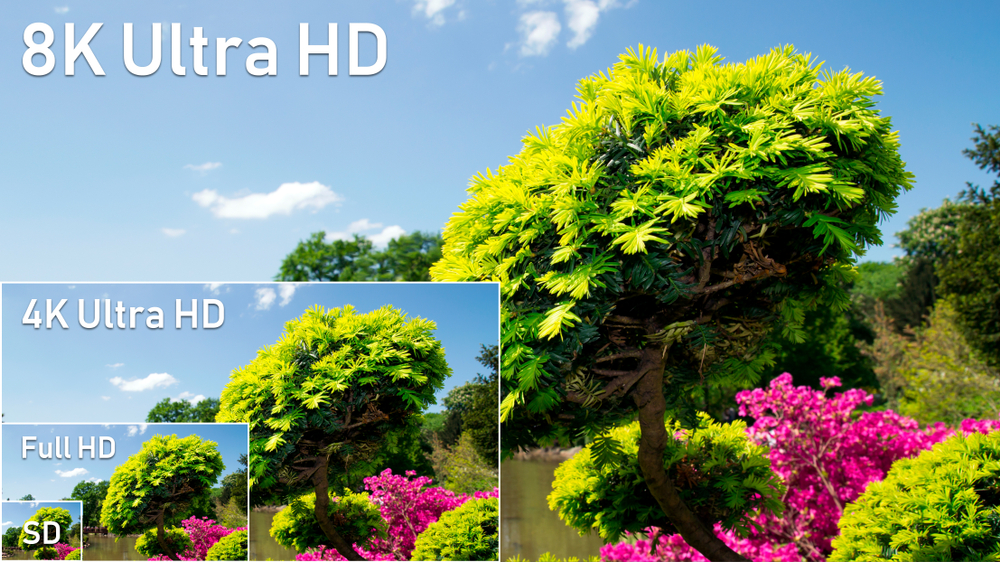 You’ve seen DVD and home video technology evolve over the years. First, there was HD (high-definition). Now stores are filled with 4K UHD (ultra-high-definition) movies. There’s a new standard on the horizon: 8K UHD. What does this mean? American Sound explains.

Four plus four is eight, right? That’s not quite how it works in digital imagery. 8K UHD has a resolution of 7,680 by 4,320 pixels, which is quadruple the number of pixels per square inch in a 4K UHD television monitor at 3,840 by 2,160 pixels.

8K UHD resolution packs four times more pixels than 4K UHD and 16 times more than 1080p resolution. Do you want to see 8K in action? American Sound has a new 98” 8k display in our conference room. With AI upscaling technology exclusively from Samsung, you’ll be blown away by what it can do.

When you zoom in on a shot from far away, the resolution and clarity of the shot lowers in quality, usually. 8K UHD solves that problem. For moviemakers and videographers, cameras that shoot with 8K UHD allow them to take wider shots and more far-away shots. In post-production, editors can go into a particular frame, zoom in on an element, and then improve the resolution of that element. You don’t lose any pixels by zooming in. There is no such thing as a grainy shot with 8K UHD. AI upscaling with 8K UHD takes footage made in a lower resolution and converts it to 8K.

8K UHD in Your Building

Imagine a beautiful drone shot of your facility. It soars from the front door to the roof and around back. Along the way, the drone takes footage of people waving, walking to their cars, and sitting on the patio just outside of your break room. Rather than needing to zoom in to get close-ups of people’s faces, the drone maintains a safe distance. In post-production, an editor zooms in on Steve waving happily. Stacy looks radiant as she’s talking to Jenny on the patio. Some high-end drones can already shoot in 8K UHD video. American Sound can work with you to bring 8K footage to life on a huge monitor or a video wall.

8K UHD has other applications. Consider telemedicine. Doctors may need to perform complicated surgeries, and they need to consult with experts in other countries. Improved camera resolutions allow surgeons to see very small things with greater clarity. How about research and development with a foreign client? Let’s say you’re manufacturing a new line of parts, and you need input from a team in Germany. 8K UHD footage and monitors can show you details in a part you might not have been able to see otherwise. When visual clarity is a must, 8K monitors are the next logical step.

You can make a dynamic first impression on everyone who walks into your facility when you have an incredible 8K video wall in your lobby. Contact American Sound & Electronics or call (859) 261-9024 for more on our 8K UHD display video wall capabilities. Better yet, make an appointment to come by and see it for yourself. We’d be happy to show you.

Talk to American Sound and Electronics about installing world-class audio and video equipment at your facility. We promise a quick response time and great customer service!